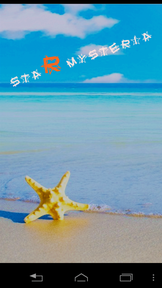 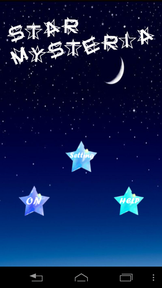 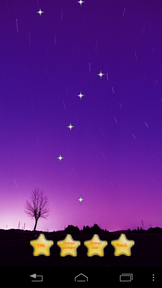 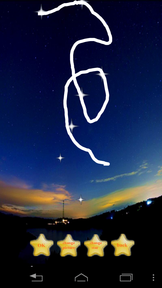 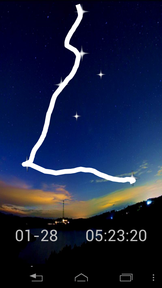 Launched in January 2012, the project Star Mysteria is an Android application development project sponsored by Samsung China Inc. I together with 3 other colleagues(Mr Yufeng Chen, Miss Yuting Lu, and Miss Yang Shi) worked as a developing team. This project is primarily proposed by Samsung to let college students develop Android application with their latest SPen function on Galaxy Note smart phones. I joined the project the team in April when the team needs an experienced programme designer.

The idea of this application is designing a delocking application that runs when a user  turn on the cellphone screen. Diffentiated from the build-in pattern lock of Android, Star Mysteria provides a more flexible functionality yet the unlocking proceedure is still quite simple. Instead of fixing all the buttons onto a traditional keypad, we changed these buttons into stars and place them on a night sky background image. Therefore, the keypad is transformed into a constellation.

This feature can better protect the user's delocking password, since the position of these stars cannot be easily remembered by other people. Also, it is not difficult for the user to remember his or her password because he can change to a constellation(we put several different constellations in to the application) that he or she is more familiar with, and set a unique star sequence that only he or she knows.

The application will draw the users' track of touching on the screen and denoting the pressure by the variable thickness of the path. Once a star is touched it will shine and the phone will vibrate. This effect will be enhancs and more accurate with the aid of a S-Pen instead of touching directly by hand.

Now, Star Mysteria is only available on Samsung App Store, which means Android phones of other brands cannot run this application currently. But I am planning to transplant it to Google Play so that other cellphone can run our application in the future.

As one of the two programmers in the team(2 programmer+2 art designer) I did a lot of work designing the structure of the programme and writing codes. After discussing the overall structure of the application with Mr.Yufeng Chen who works as another programmer, we divided the implementation work into two parts. I took part of the users input and setup interface and the codes that support it(like password storage and verification, the using of SPen library, and the switching among different constellations).

The scale of this programme is not as large as we have expected(About 2000 lines in total), there are still several obstacles that we met during developing procedure.For instance, it took us preety long time to understand how an application can have the system's permission of launcing when the system is about to run a screen lock, and the relation between activities and background service are also hard for us to handle in the beginning. But we finally carry out a programme that fulfill the initial requirements.

The main part of this project is finished in August 2012 and the application is still available on the Samsung App Store. It was a pitty that we didn't win any prize in the contest among all the SPen applications, the 4 months developing experience equiped me with all the necessary knowledge that I need in developing an Android application independently. It is this very project that led me to my final year's project which is also an Android application called QR-Motion, click here to see the story of QR-Motion. 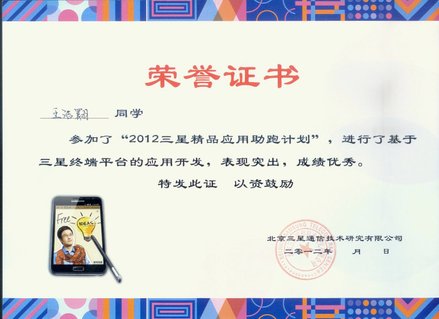 The Certificate from Samsung China for My Participation in the Project

Robox is a robot-like digital alarm clock designed and built by a group of student including me. We spent 2 months time building this building this machine out of several hundreds of discrete circuit components. Robox has a funny design of its appearance and a complecated design of its inner circuits. To see more about Robox, click here.

In Febuary 2012, I together with Ms. Xun Dai (on my left) and Ms. Chun He(on my right) participated in the MCM/ICM mathematics modelling contest. We won a Meritorious prize with a model measuring the opportunity of commercial crime in a social network. To see more about our model, click here.

QR Motion is an ongoing project aiming on extending the capacity of current QR code. Instead of expanding QR code into larger area, QR Motion will extend the capacity of QR code by changing its pattern over time. Click here to see more about QR Motion.

In the Summer of 2012, Star Mysteria was released on Samsung App Store. This fancy Android application was developed by a group of student from Beijing. To see more about Star Mysteria, just click here.